I hear it every night, at least once (as well as the ever-popular, funny-the-first-three-hundred-times "do y'all sell Depends here?"), along with a thousand other comments, questions, stories and speculations from the adrenaline-boosted patrons milling about the hallowed grounds of Netherworld Haunted House.

Working behind the counter of the Netherworld gift shop, you learn to wear many hats in addition to humble shopkeeper. On any given night, at any given time, you take on the role of bartender, therapist, babysitter, financial advisor, friend, coat-check clerk, stylist and walking Wikipedia. Standing as a sort of "scare free zone", the gift shop provides a calming social outlet for any and all. Perfect strangers will share just about anything with you when their tongues are loosened by scares - aside from the afore mentioned need to swap one's drawers, you literally see and hear it all... 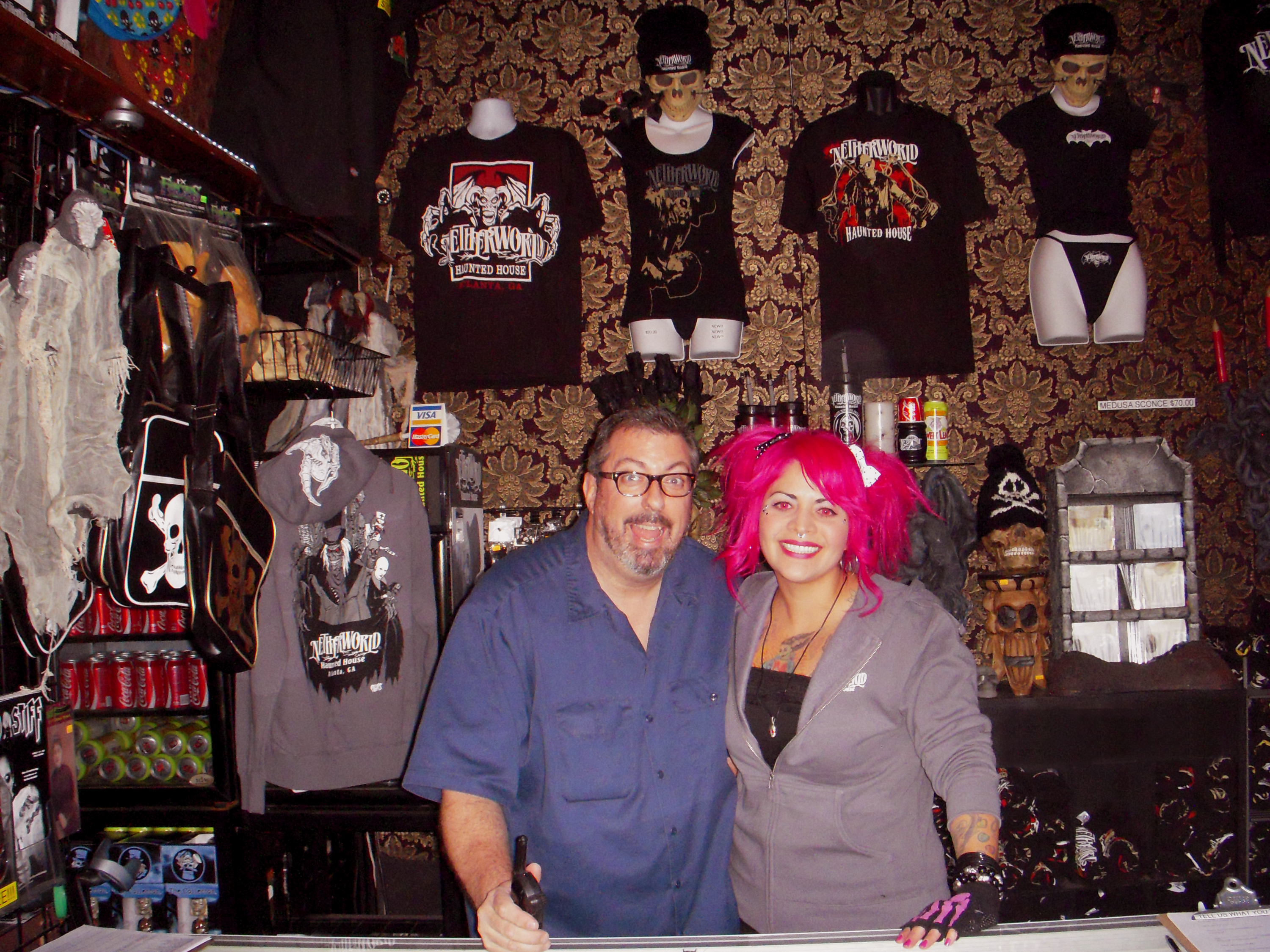 See, the real entertainment at a haunted attraction doesn't necessarily come from within the darkened chambers of the house. The true thrills, chills and laughs come from the rabid fans who line up at the shop for a chance to take home some badge of courage proving they survived a tour through the living embodiment of their fears. Thrills in the form of the occasional celebrity visit, or an outing of sorority sisters decked out in sexy costumes purchased the night before at the local party store. Chills in the form of the family of eight who drove 375 miles overnight in a rickety '81 AMC Pacer without a proper hygiene pit stop in order to spend an evening in the south touring a humid fright fest. And laughs in the form of, well, practically everyone. There's an Emmy-winning, long-running situation comedy just waiting to be launched about these folks - they are improv comedy at its finest, and I get a front row seat every night of the season!

Like any situation comedy worth its Nielsens, Netherworld sees an amazing array of humorous stereotypes, approaching the sales counter night after night for an unknowing audition for their minor - but very memorable - walk-on part. Short of a director on set shouting "action!", the stage is ready...

There's the previously referred to family of eight. They travel all over the country on a shoestring budget to visit as many haunted attractions as possible, and they wear their colors proudly. A hat from here, a t-shirt from there, a button from this haunt, a patch from that one. They go out of their way to use a compliment of your attraction as a launching pad for a discussion on the many others they've descended upon:
"We just got back from 'Willy McWiggins' Chilling Chicken House' in Broken Ankle, Missouri - shoot, it weren't nothin' like this! They did have some scary roosters, though - got me this haunted chicken foot necklace!"
The entire clan adores Halloween, and doesn't care who knows it. Our kind of people!

Then we have the suburban mom. SUV packed with teens, she bravely dons her hottest casual duds and forges on into the lead position, warding off any impending danger to her brood of charges - all the while unaware that stiletto heels were not invented with a walking tour of the dark in mind. As she arrives at the gift shop, ready to supply the kids with commemorative swag from their successful adventure, her only personal request is that we call her if we find her left shoe...

We can't forget the swaggering guys, who read somewhere that a great idea for a first date is a scary movie, since it makes girls cozy up to you in the dark. Guaranteed romance, compliments of the fear factor!  A haunted house would have to deliver on that promise tenfold, so why not bring your lady to the scariest place on earth? Forty-five minutes later, our stalwart heroes come streaking out of the haunt like cartoon characters, feet blurred in a circular whirlwind as their dates calmly walk out behind them with ladylike grace. Best of luck tonight, guys!!!


Another favorite is the corporate team building group. Fueled by nervous energy (and the three scotch and sodas they needed to bolster courage), what began as a novel idea for encouraging teamwork ends in an every-man-for-himself free-for-all, as screams and laughter quickly melt away any semblance of unity.

Next comes the gent who inquires about "big boy sizes" in t-shirts. A monstrous teddy bear of a fellow, all smiles and laughs, he is genuinely amused by the fact that we only carry up to 3XL in any of our styles. Sporting a couple of armfuls of artsy horror-icon tattoos, he lets us know with great enthusiasm that he has found new ways to sport his love of the holiday, as most folks don't stock his sizes. His sleeves represent years of dedicated haunt fandom, a virtual "who's who" of the fiends and freaks of the scare scene. Unsolicited, there among the Freddies and Belas and Brides and Pinheads dwells Netherworld's Collector - our very own human billboard (I dare even the most near-sighted among us to miss those massive limbs)! He is content to buy a hat or a couple of shot glasses, but encourages us to think big next season!

And speaking of enthusiasm, let's take a moment to talk about Zombie Rampage...our very own branded energy drink, what started out as a novelty tie-in to a themed haunt grew into a frenzied need by thousands of teens (and ex-teens) to satisfy their own rabid hunger! If you think werewolves and zombies and vampires are crazed, try telling a group of hopped-up high schoolers that you just sold out of their favorite new pick-me-up - I'd actually prefer to have my brains devoured by the undead than to face the scorn of a sixteen-year-old suffering from energy drink withdrawal. Thirty seconds later, thumbs flailing away wildly on their smart phone keyboards, half the kids in the city are alerted to this travesty and you have an epidemic on your hands!!! Best advice I can offer to any respectable gift shop clerk: stock plenty of energy drinks. Excited teens are far more effective advertising than any primetime network commercial.

A particular favorite is, of course, the sheepish boyfriend or husband who asks his significant other "Would you like a pair of sexy Netherworld thong panties?". Everyone within earshot knows who the purchase is really for, and that the real question is "Can I buy you a pair of sexy Netherworld thong panties to wear for me?" While the answer varies from lady to lady, nine out of ten times the blushing fella walks away with a crumpled bag containing his new prize stuffed into his pocket, proud of his clever - yet all-too-transparent - ploy. He goes home happy, and we get some very interesting marketing opportunities... 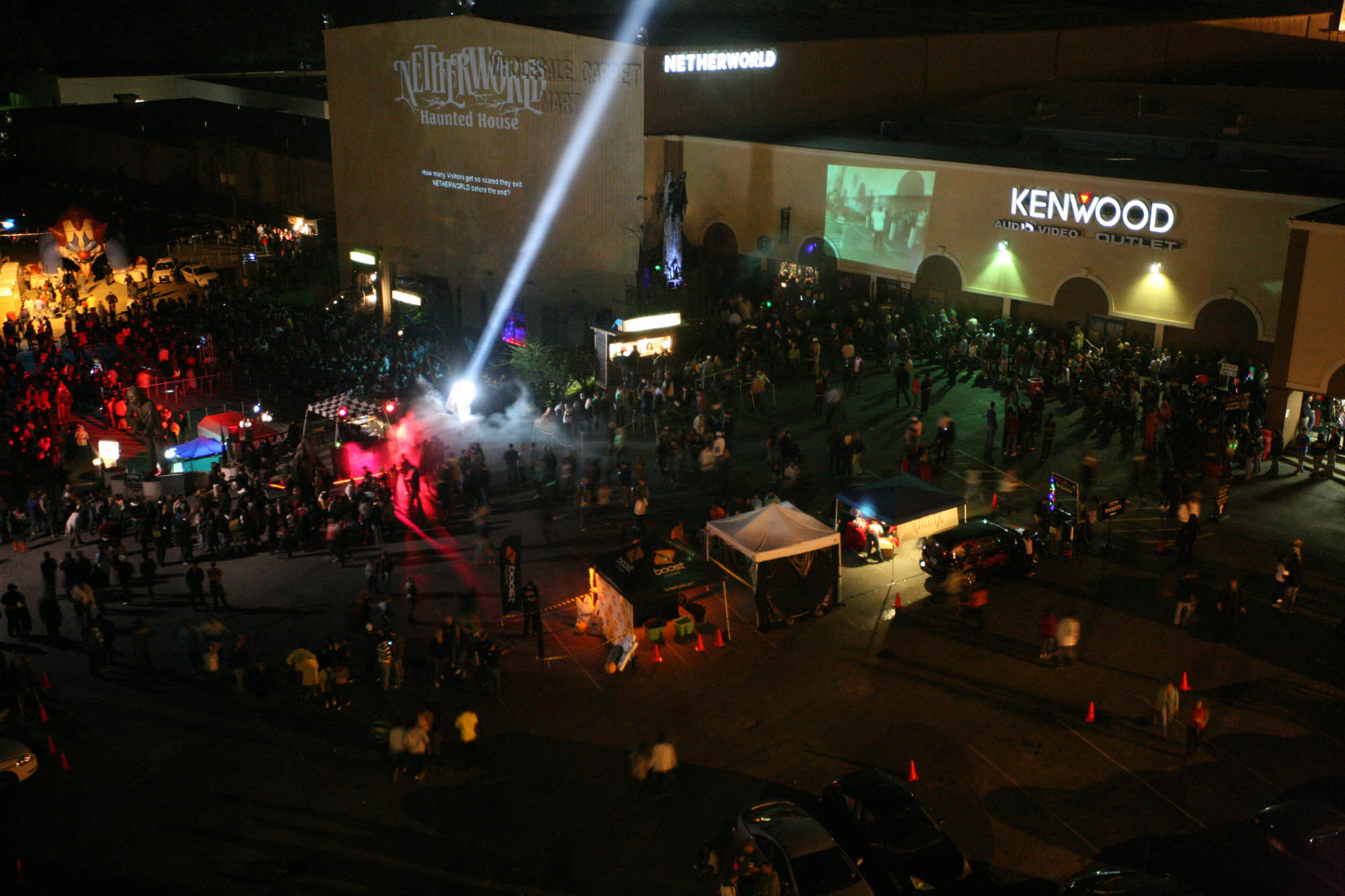 I'm also a big fan of the Haunt Romeos. You've seen them. The lone single guy in a group of five couples, overcompensating for his lack of a date with a heavy dose of come-on overkill with the more ghoulish girls in the cast. His comedic attempts at attaining a date with the sexy vampire bride lurking about the parking lot - her once-pretty face contorted in a grim, blood-soaked demonoid visage - border on sad, as he has convinced himself that a snappy "wanna go to prom with me" is the first time that line has ever been used on this patient princess of the dark. Truth be told, he'd be elated by a sincere reply of "I'd love to".


What haunt would be complete without the spooky groupies who hover about nightly, dressed in black, shuffling about without ever seeming to actually enter the haunt. Authorities on all things Netherworld, they live and breathe the experience, and - much like myself - seem to enjoy the antics of the visitors far more than the frights that await inside. They wait anxiously for each group to exit, and approach the gift shop with whatever nuggets of comedy gold they may offer.

Hauntworld takes you to Los Angles for the famous Monsterpaloza horror movie make up convention.  If you own or operate a haunted house you need to watch this video.  Monsterpaloza is a show

Hauntworld takes you inside another major Horror Retail Store called Nightmare Toys in Las Vegas.  For all you haunted house owners watch this video to see what a big Halloween retail store sells

Hauntworld takes you on another horrific adventure this time to Los Angles and a trip thru the World's biggest year around Horror store - Halloween Town.  Many haunted house owners are now t

Hauntworld takes you on a tour of the most amazing Horror and Science Fiction Museum in the World.  We take you on a rare behind the screnes pov tour of Icons of Darkness located in Los Angles Ca

Hauntworld visits 'KING OF THE B MOVIES'  Tom Devlin Hollywood Movie Workshop.  Prepare to go behind the SCREAMS and learn the secrets of how Tom Devlin creates Horror movie props an

Go Behind the Screams at The Darkness Haunted House - Review by Hauntworld.com    www.TheDarkness.com   Every industry has a few iconic personalities, products,

The Darkness haunted house opened for the 2022 Transworld Haunted House and Halloween Tradeshow.  The event was limited to 250 guests which includes a seminar and a behind the screams tour of The

Hauntworld publisher Larry Kirchner who also owns some of the World's best haunted houses takes you thru the entire Transworld Haunted House Tradeshow 2022.  Watch Larry walk the show and tal