How to Build Scares Into Your Haunted House - Designs

When designing haunts each year, the Oak Island Team is always looking to out-do our scares from the year before (aren’t we all!).  We know we are trying to create great memories for our guests, so when we sit down to the design table, we ask ourselves “What were our most memorable scares from last year?”  Hands down, the greatest memories we have from our haunts are the properly executed illusion based gags.

“Illusion Gags” are performer operated scares that appear from furniture, pictures, clever camouflage or other static objects that suddenly come to life when a guest least expects it. In essence, it’s a magic trick that reveals a performer at an opportune moment.  The key to a great illusion gag is that it is positioned so that a guest has suspended his/her fears- meaning, it sets the illusion that there could not possibly be a threatening performer in a certain location at that moment.  Once an illusion gag is executed, it is a great opportunity to create apprehension through the rest of your attraction because subconsciously guests will not feel that there are any safe zones in the haunt.  When the overwhelming experience of the seemingly “impossible” scare happens once, your “battle” to scare the wits out of your customers throughout your entire haunt is half won! 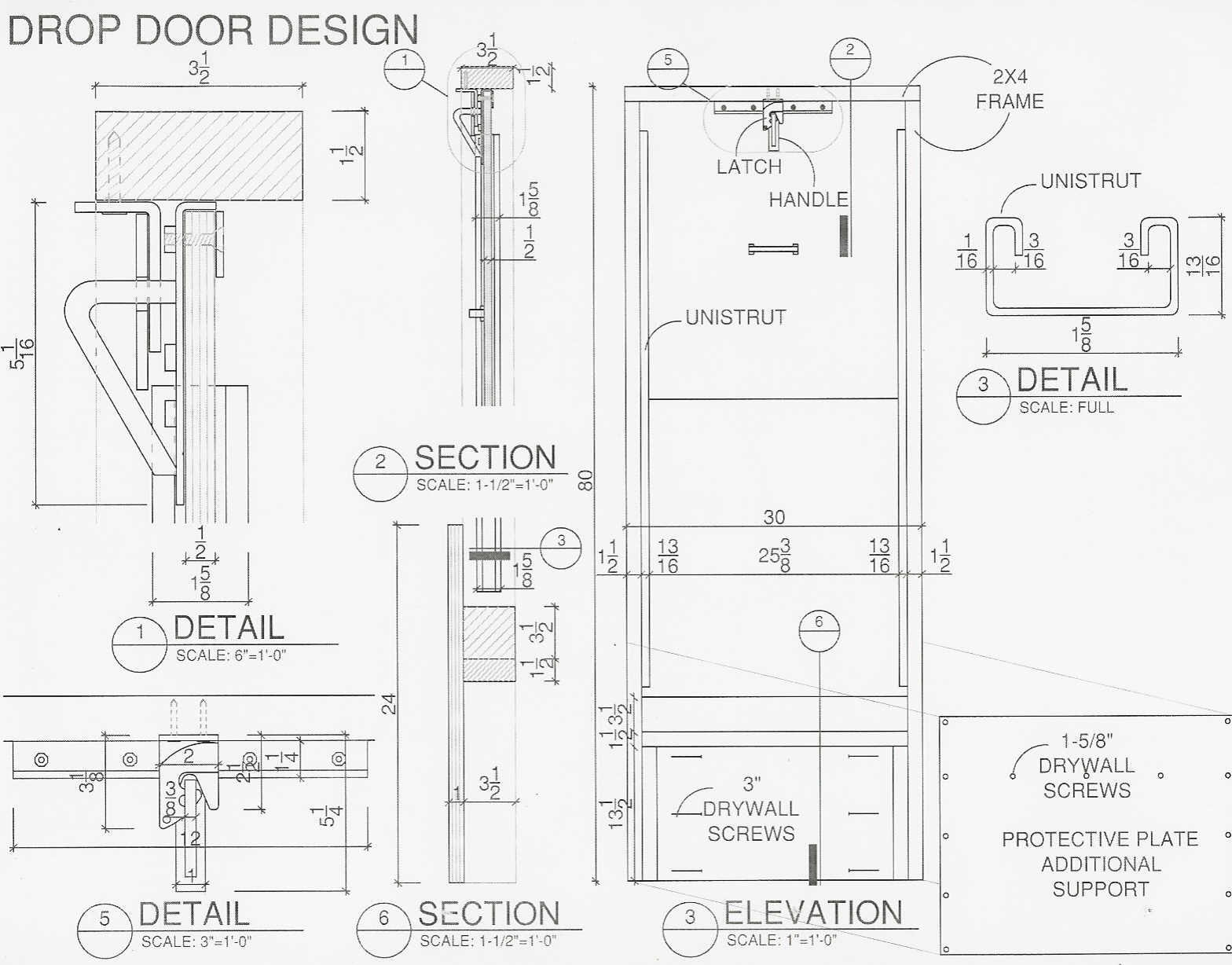 Camouflage gags are based upon a chameleon’s principles of blending in to local surroundings.  For example, if you have red curtains in your haunt, dress a performer entirely in the same red curtains and have them stand among them- great scare!  If you have an outdoor haunt, buy some camouflage netting and dress a performer as a bush or plant.  You may be amazed at how well this technique works!

You can also get very creative with the idea of camouflage illusion gags.  In a funeral home, your performer can be dressed entirely in “mourning flowers,” or on a hay ride, your performer can be dressed as cornstalks or a pile of hay.  Another great example of this design technique is the “Polka Dot Room” so many of us are familiar with.  All of these are very effective scares!

The second type of gags, Moving Door Gags, are gags we will explore much further in this article.  These illusion gags consist of the art of hiding performers in static objects, then utilizing a moving door or “gag door” to make the performer suddenly appear.  These doors can either be drop doors or slide doors.  The number of elements these gags can be implemented into is only limited by one’s imagination! 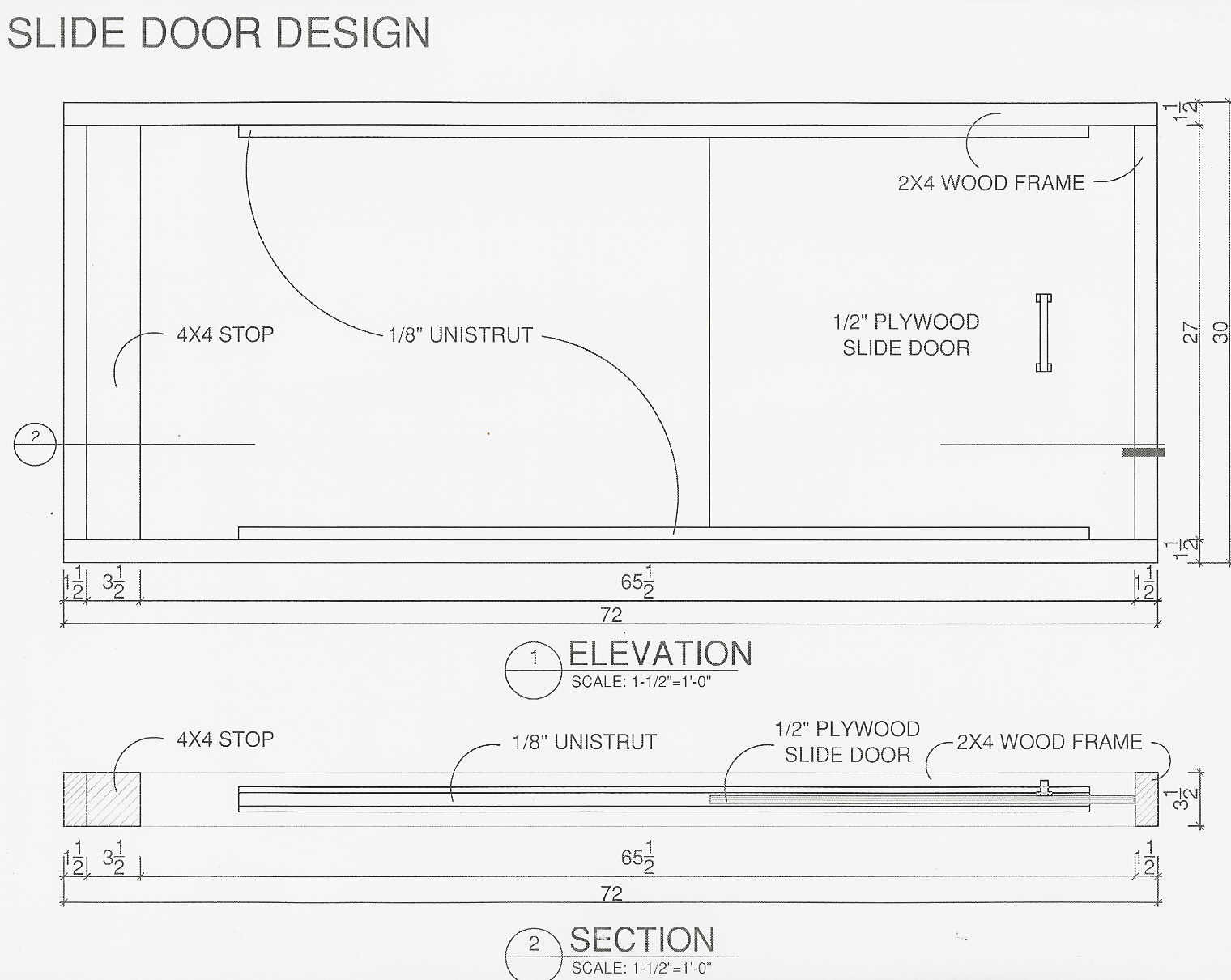 The main difference between a drop door and a slide door is that drop doors fall vertically and slide doors move horizontally.  The falling of a drop door creates a loud “bang” which adds an additional scare to the illusion.  To allow a “fall” distance, drop doors work best when you want your performer to appear three foot or higher off the ground (such as appearing from a portrait or mirror hanging from a wall).  There are several ways to build a drop door, but most of them have inherent durability problems.  The real challenge in building a drop door is when you want to build one that can withstand thousands of repetitions.

In several years of development the Oak Island Team tried many different drop door designs, to include using screen door trolleys, ball bearings, welded steel frames etc.  We now use a relatively simple design that is able to withstand long-term use proven through several years of field testing. The required latches and specialty pieces are machined in our studios in Tampa, Florida.  Please note image 1 for the specifics of this design. 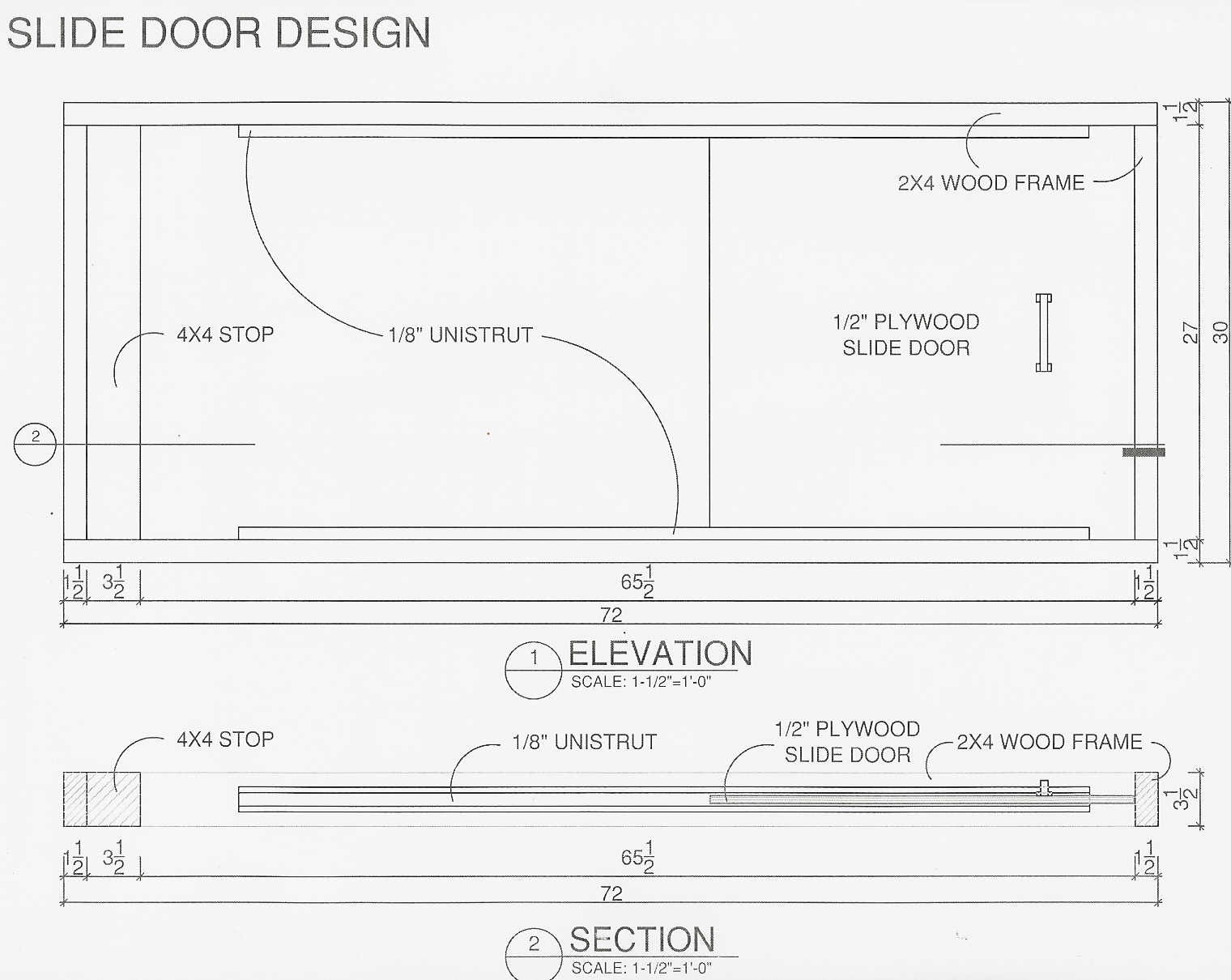 Image Caption
Note image 2A and 2B:  Here we see a standard Oak Island gag crate implemented with a drop door.  Crates are wonderful opportunities to create illusion gags because of their theming versatility.  When a guest nears these crates, they do not expect that there would or could be a performer in them.  The illusion stands in the fact that the gag appears to be three crates standing on top of one another.  By stacking the crates crooked, the illusion is further enhanced. 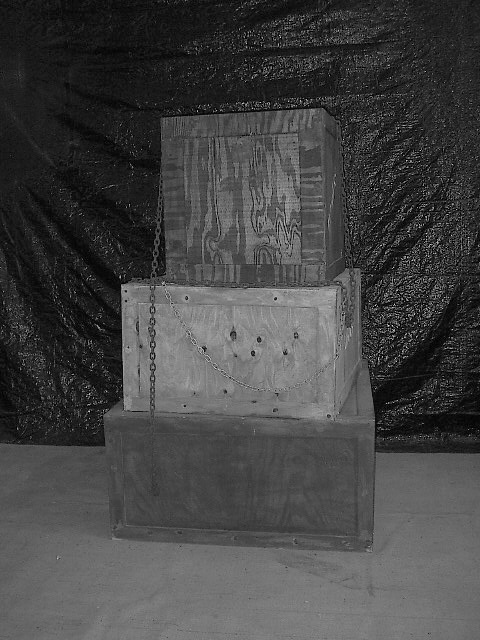 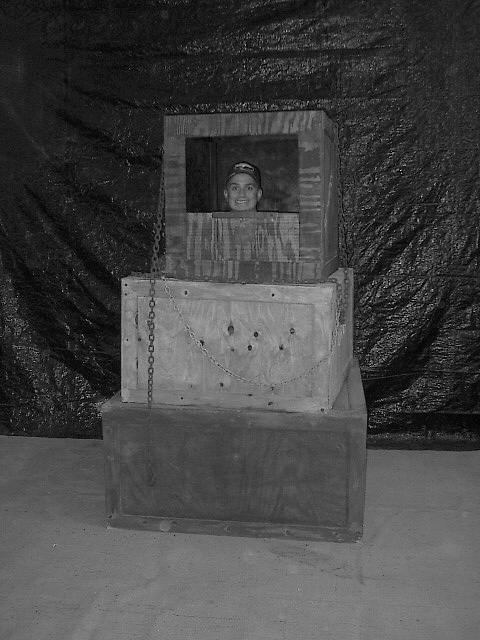 Image Caption (label as before and after)
Note Images 3A and 3B:  Here we see a common drop door design.  The mirror is inset into the wall and the frame of the mirror hides the offset.  Décor placed around the illusion helps divert attention from the specific performer placement point.  The mirror on the wall quickly drops to reveal a performer.   A similar illusion can be done with framed pictures, or anything else you can imagine that would not look out of place positioned on or near a wall.

Image Caption (label as before and after) 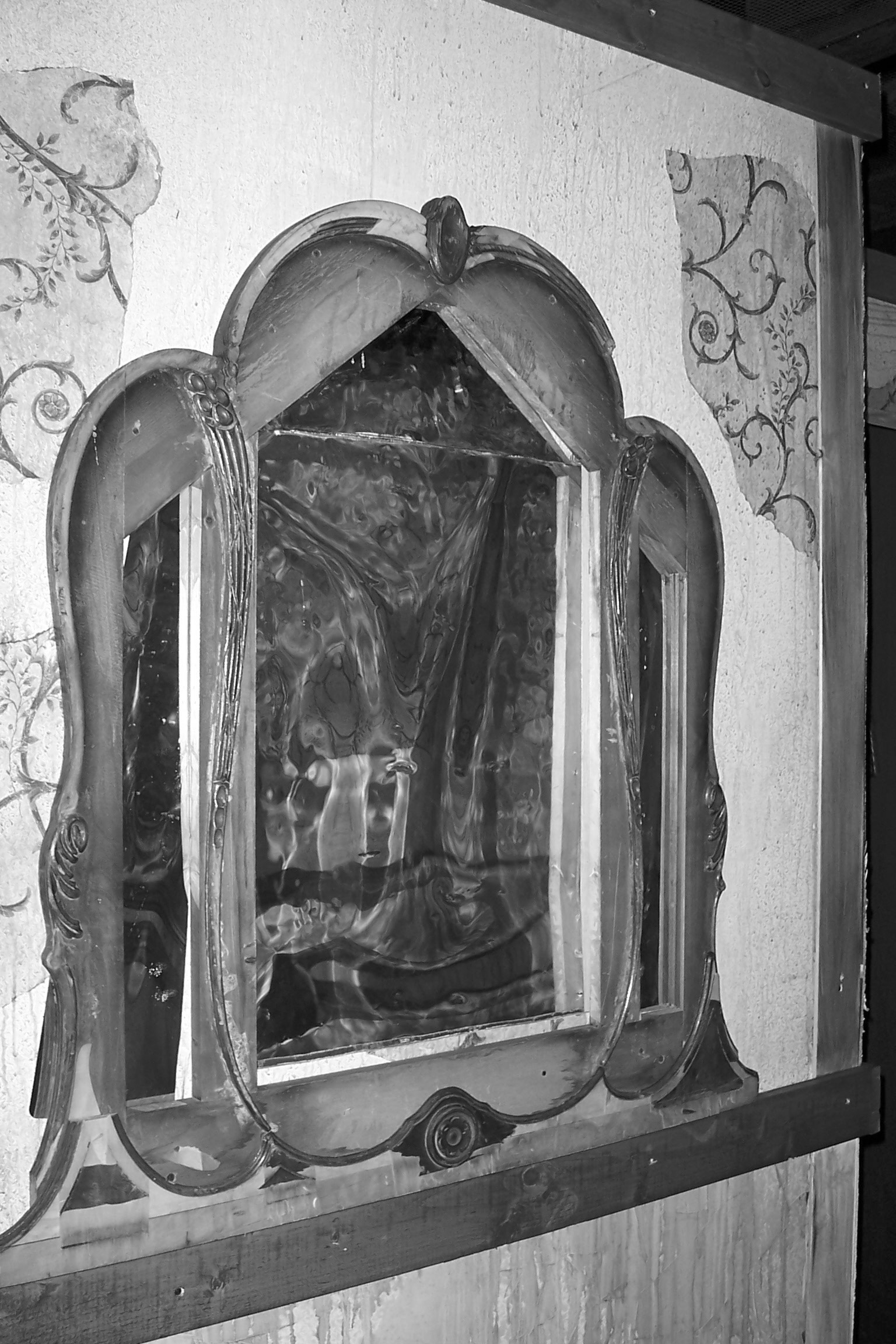 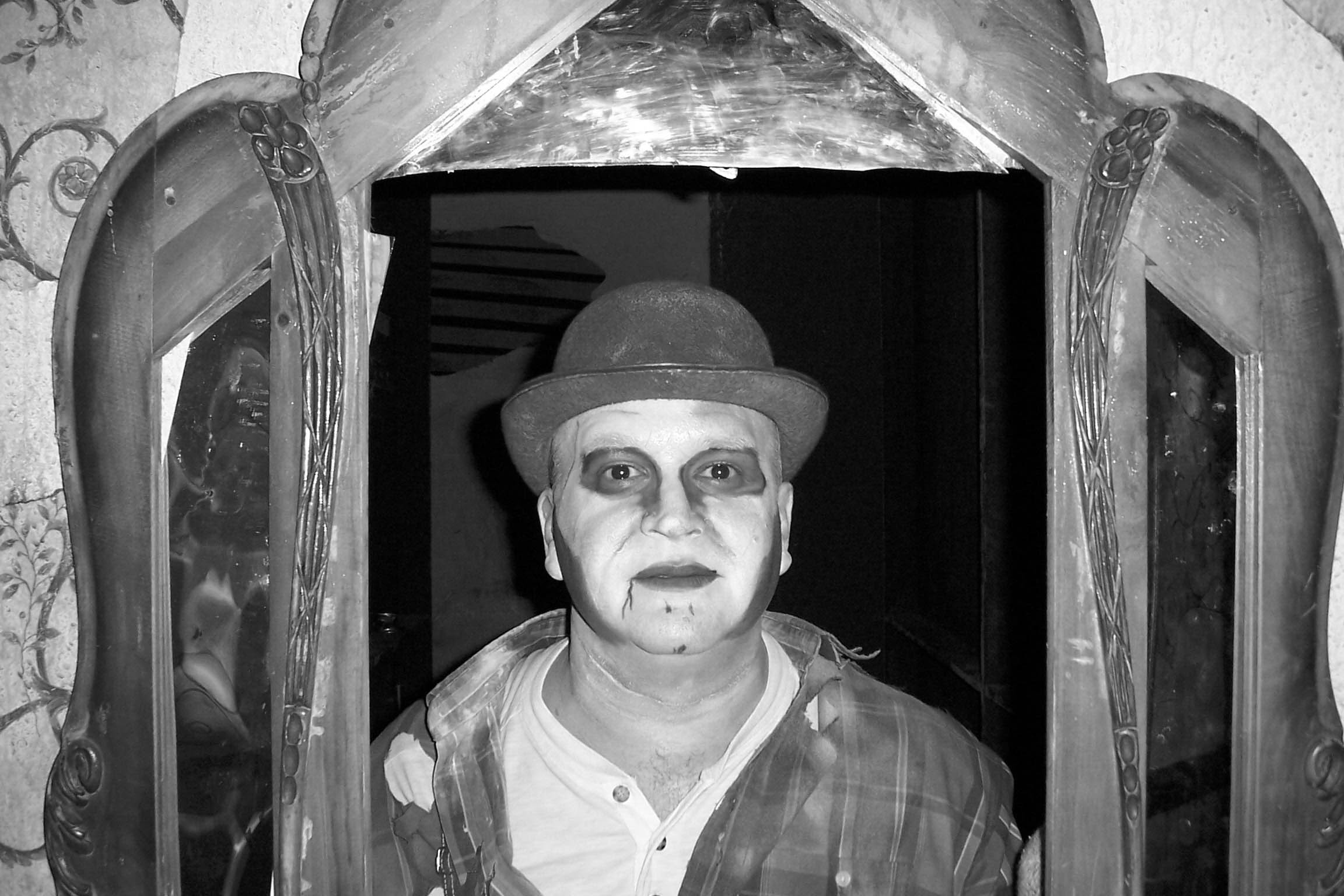 Slide doors move horizontally and are advantageous when you want your performer to appear from large pieces of furniture, doors or low positions.  Slide doors will not have a loud bang when a performer uses them (unless you have a very zealous performer!), but they offer more flexibility and a vast amount of speed in performer appearance.  For example, a great way to use a slide door is to make a “hall of bedroom doors”.  Line a whole hall in your haunt with doors on both sides.  Put large, obvious gate hinges on all of the doors so that it sets the illusion that the doors open normal (in or out).  The doors actually slide, like a pocket door, enabling a performer to appear from behind them at a high rate of speed and differently than the subconscious mind expects- a great scare!   The Oak Island Team builds slide doors out of custom machined latches and fasteners, unistrut trolleys and unistrut.  Please note image 4 for the specifics of this design.

Image Caption
Note Images 5A and 5B:  These images show an example of a location where a slide door would be applicable over a drop door.  The three drawers on the left of the desk are actually an illusion- they are one gag door on a slide.  A performer can quickly slide this door and get a great scare!  Note that the slide door slides into a maintenance area to inhibit the door opening into potential guest flow. 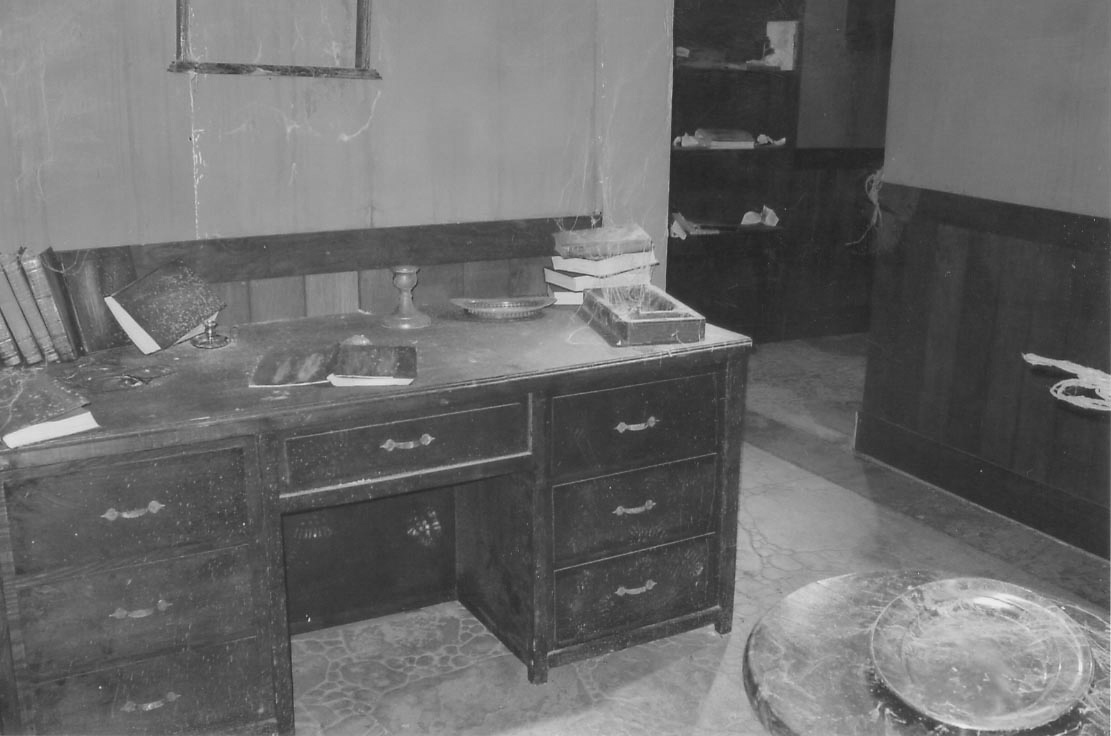 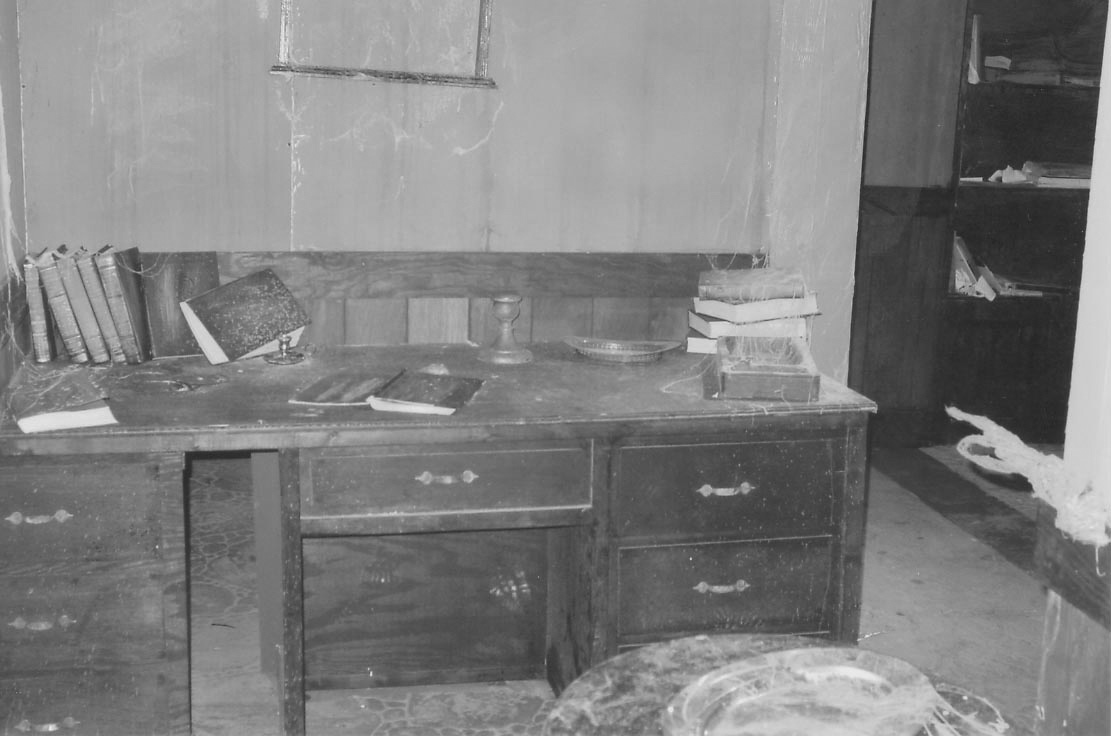 Image Caption (label as before and after)
Note Images 6A and 6B:  In this example, we see how a slide can be used to move entire pieces of furniture quickly- for an impactful performer appearance.  This gag illusion is made from a standard bookshelf.  As a guest approaches, the bookshelf suddenly slides away to reveal a villain.  Note that the entire piece of furniture slides into a maintenance area.

Image Caption (label as before and after) 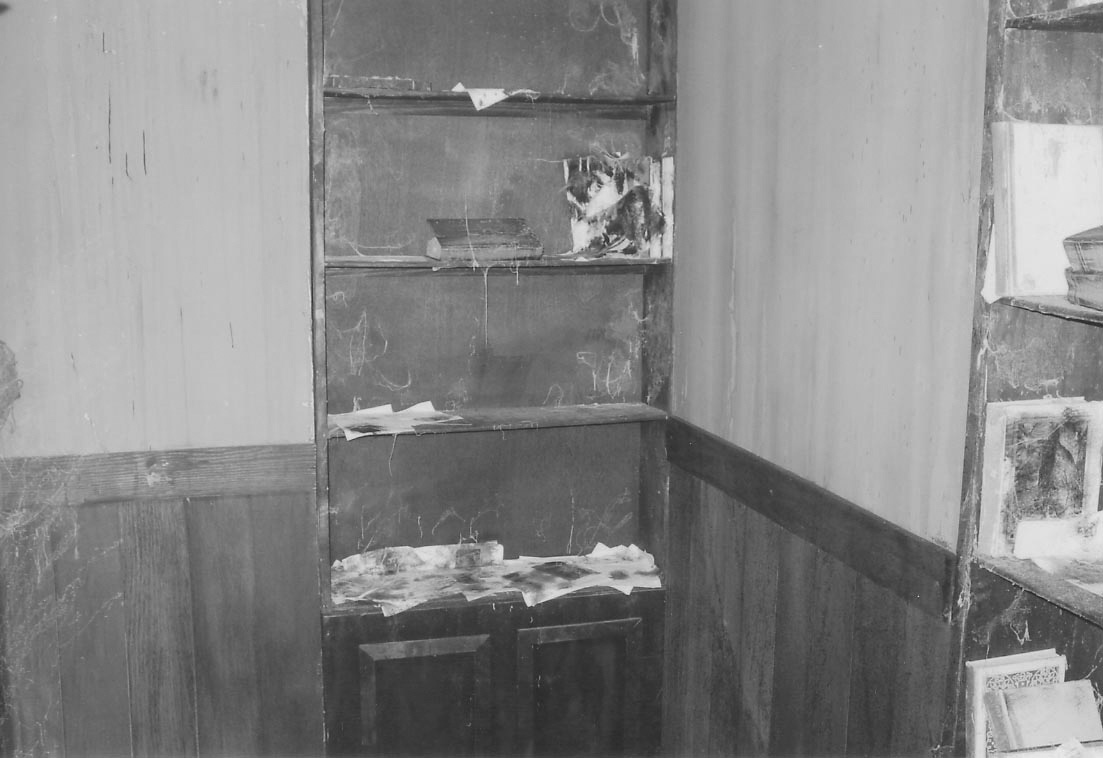 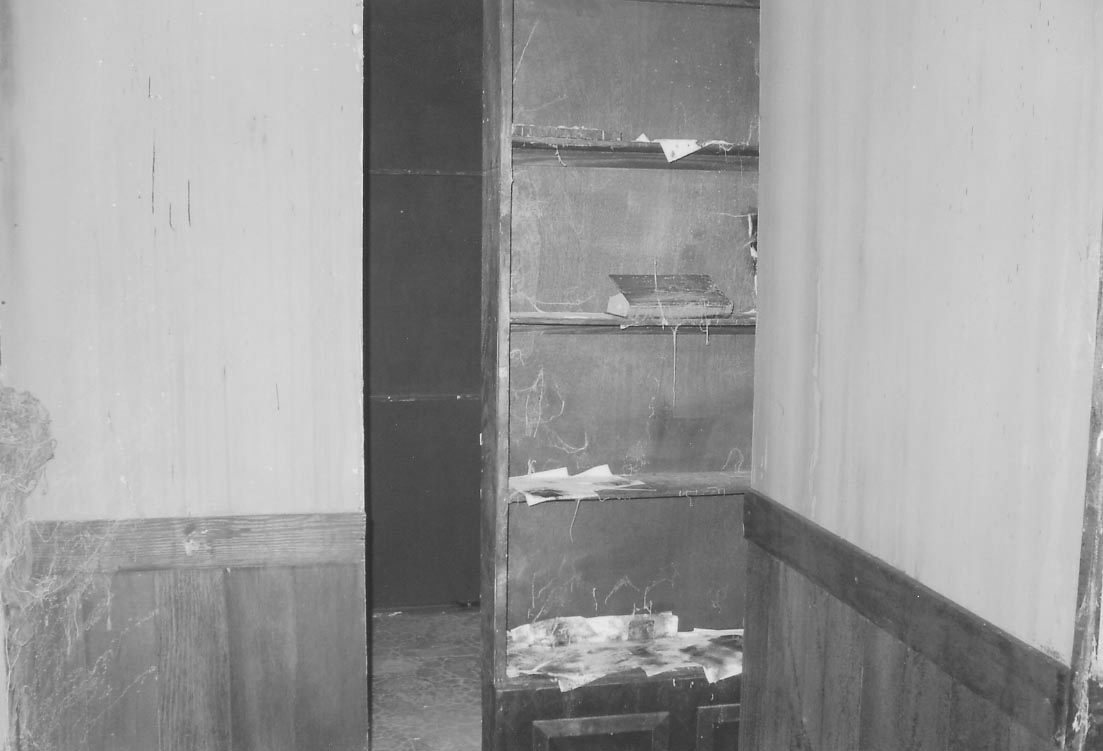 Illusion Gag Placement in Your Haunt

When entering a room in a haunt, most customers immediately scan the area and assess where possible threats may come from.  This is what we want as designers.  This assessment of the room gives the “all clear” to the mind and sets the guest up for the illusion gag.

One of the best ways to design a room around an illusion gag is to use an animation as a diversion.  For example:  walking into a room, a hangman hangs from the rafters jerking violently.  On the other side of the hall, there are several pictures, candelabras on small tables, and a china hutch.  As a guest, I have assessed this environment and have decided to focus my attention on the hangman- because that is where the scare will come from.  In actuality, the performer hides in the china cabinet as a gag illusion and appears at the most opportune moment- the moment when the guest gets close to the hangman and their attention is the most diverted.

If you have a high throughput, don’t forget to place your gag around 90 degree corners as much as possible to prevent guests farther back in the haunt from getting tipped off to the upcoming gag.

Challenge Yourself and Your Gag Operators!

How many cool ways can you think of to make an illusion gag?  Can your performer appear out of a television set or the body of a corpse?  What about a small trash can or the backside of a farm animal?  Be creative- the more outrageous the more startling!

Just because your performer is operating a very cool gag does not mean they also cannot have several other opportunities to scare.  As a matter of fact, I would highly recommend this.  Often we find a performer gets bored and is physically challenged when operating the same gag all the time.  You should be able to get two or three strong scares out of one performer.  For example, if a performer is operating a drop door with his/her right hand, put a small inconspicuous hole in the wall for his/her left hand to also get a quick “reach out” scare.  In addition, give this performer a hand trigger for an air cannon placed cleverly right after his/her scare.  You have created three scares with one performer, a primary, secondary and third.  This will keep your performers and guests thrilled!

In closing, when designing or upgrading your next attraction, challenge yourself to find a unique way to present each of your performers to your guests via illusion gags. This format will give your guests the scares and memories that will set your haunt above the competition!

BIG AND SCARY USING STILTS TO SCARE !     I have been performing on stilts and making stilt costumes for abou

A few weeks ago we published an article about haunted drive thru experiences and we informed you that more than likely they would all be scams, shams and a waste of money or simply unsafe.  There

Building Layers of Terror!  Taking the Devil out of the Details by Ben Armstrong  At last you have a rock solid Haunted House. The basics are strong, the cast is tight, and the screams f

Being Monsters By: Drew Cothern   I have a problem. Perhaps it’s my mischievous nature or a pathological impulse, but I need to hear people scream. It’s an addiction, I can’t

Read Blog
How to Make a Haunted House Halloween Corpse

BUILDING A BETTER CORPSE By Michael J. Chaille   Haunted Attractions, like any produced event, can take on a life of their own as all the pieces of the production slowly come together.

60 Actors in 60 Minutes By Ken Franklin, Co-owner of FaceFXmakeup.com     Putting on makeup for a haunt event isn’t as easy as some might think.  There is more to it than slap

Creating a Room to Fit a Theme By Josh Wells Theming has become an increasingly important factor when designing a haunt. Developing a theme not only separates your haunt from others in your market

Read Blog
How to Build Scares Into Your Haunted House - Designs

Illusion Gags:  Creating Memorable Scares!   When designing haunts each year, the Oak Island Team is always looking to out-do our scares from the year before (aren’t we all!).&