Should All Professional For Profit Haunted Houses Pay Actors

I want to  talk about should haunts pay their actors.   I see this as a two headed dragon.  Some actors online who actually volunteered are crying about “being forced” to work long hours & not getting paid, I'm like WHAT?  Who forced you to do anything?  Even if the haunted house was paying you wages, you're not forced to stay there.  This is America.  We live in an age where customers, employees, and volunteers alike can lash out on social media when unhappy.  Truths are embellished, lies are told, one-sided stories are given, & rumors are spread.  Short of getting an attorney and filing lawsuits, your best bet is to block those people and ignore!  You really can't do anything about crazy people spreading rumors about your business.  But in this situation, these actors (who supposedly signed an agreement to work for FREE) are lashing out.  How dumb is that?  You signed a document to volunteer if you don't want to work for free don't problem solved.  There are many haunted houses around the country that need volunteers especially charity based haunts.  The entire haunted house industry started as a charity based industry .  Operating haunted houses with volunteers for charity is nothing new and for many haunts it will always be volunteer only making people scream for great causes.  Kudos to those haunts and the people who donate their time.  With that being said I don’t think a private, for-profit, very successful haunted house should make money off the backs of their actors, NO WAY, but those actors only have themselves to blame.  You signed the agreements, you worked, and you did it of your own free will.  Don't cry now.  If no one volunteers, then they’ll become a haunted house with no actors OR they’ll start paying actor wages.  I also hear rumors of haunted houses allowing 12-15 year olds to work in their haunted houses as actors... truly i find this totally irresponsible.  Anyone who operates a haunted house knows the crowds can get rough to have someone 12 to 15 working inside your haunt is a bad idea.  I never hire anyone under 16, and older is preferred.  Who knows what is or isn't true on social media anymore.  It's the American way now to lash out thru social media to find crying eyeballs for your plight.

I  understand some haunts need volunteers just to keep the doors open, and those who donate their time do so of their own free will because of a strong passion for haunting.  Haunting is without a doubt a disease and a passion for many.  Big giant haunts, with massive attendance for profit should pay their actors otherwise they'll face this type of criticism every season.   But hey I've always learned in this industry what works for one doesn't always work for another.  If actors don't like volunteering their time don't show up! That solves that problem right? If a successful for profit haunted house wants to operate with volunteers, and people willingly sign up in droves that is their choice.  On the flip side if some of those same actors don't like it then find a new place to haunt where they pay!  Again problem solved. 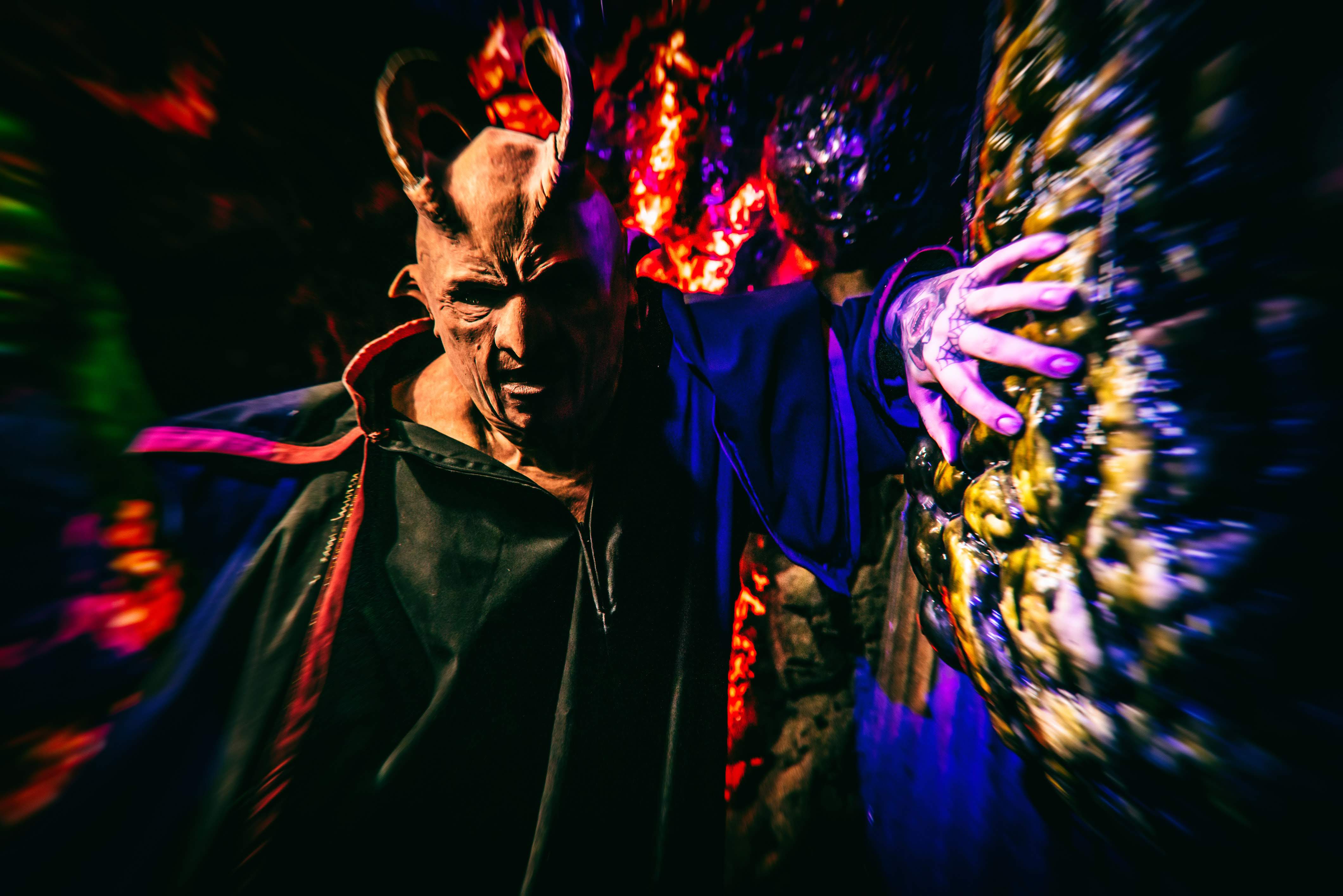 Speaking of wages the biggest issue haunted house owners face is the cost of doing business, and payroll is a giant expense.  Truthfully, haunted houses could become obsolete fast.  Haunt owners are migrating away from haunting.  They’ve discovered lower operational cost options like escape rooms, axe throwing, social media bars & more.  Their passion for haunting brings them back again and again, but operating a haunted house with over 100 staff members  is too expensive, and it’s hard to manage all those personalities, especially when you bring social media complaining into the fold.  Haunt owners are experiencing a reality check.  We need to pay our staff but at the same time find our way back to operating with 30-50 actors not 75-125.  Is more better?  Is more scarier?  If a horror movie had someone jumping out around every corner, would that be better than a scream when you least expect it?  More than monetary, I can understand why a haunted house wants to operate with volunteer actors.  With volunteers, they're getting people who really want to be there.  Still, I feel they should be paid.

The Darkness opened a year round escape room facility 3 years ago, and now those escape rooms have almost passed The Darkness in total revenue, but due to staffing differences, the escapes are easier to operate and more profitable by far.  When you build new haunt scenes, you make no additional money, but when you build a new escape, you get new bookings.  See the differences?
Instead of just changing up the haunt annually, I’m more focused on additional fun options.  Today, the exit of The Darkness is filled with games, pinballs, a mini escape, gift store, and an electric chair experience.  All of these are added FUN for the customer and more revenue for my business.  At Creepyworld, we totally cut out a haunted house and added a midway with axe throwing, zombie paint ball, a mini escape, photo ops, gift store and horror movies.  When I finally acquired the building next door to the Darkness, my first thought was BUILD ANOTHER HAUNT.  Now I'm removing that haunted house.  Why?  Because it doesn't make money like adding axe throwing, escape rooms, a bar, games & pinballs.  I had to choose…Keep paying a ton of actors to operate a $5 up-charge haunt, or lose 5,000 square foot of haunted house and pick up a full time, year round social bar with axe throwing and more.  This is the future! 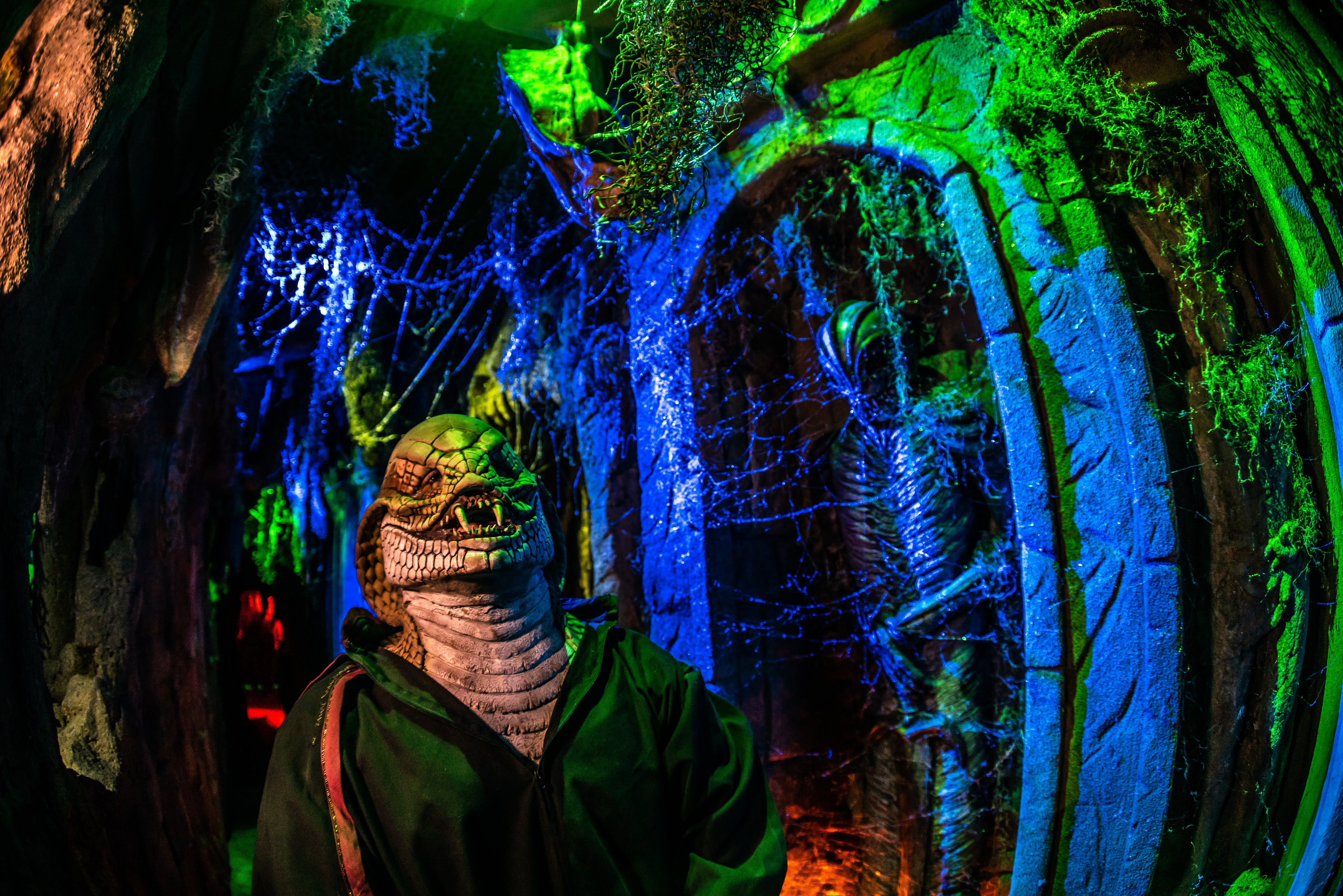 My plan for The Darkness (with all its amazing animations and cool special FX) is to attempt to operate with 50-65 great actors who are the most dedicated, want to be there, and care about the business.  To accomplish this, we need to focus on making the haunted house mean and lean, offering a variety of scary fun things to do that aren't necessarily a haunted house.  I now prefer upcharge attractions whereby ONE person can operate, and still bring our guests a great experience.  I believe the days of trying to be the longest and biggest haunt (which requires the highest number of actors to operate) are over.  Things are shifting and shifting fast.  Look no further than the Transworld show itself.  It started as a 50,000 square foot haunted house only show.  Today, it’s Halloween, Escapes, Christmas, Agritainment, VR, and some Halloween retail, and who knows what next.  This is the future, and I see Transworld embracing it.  No longer are they just looking for the next haunted house exhibitor, but instead focused on new entertainment industries as a whole.
In closing, your staff is your most valuable asset, you should pay them, but rather than going with some kind of volunteer based formula, trying making your haunt better while at the same time shorter and more manageable.  Go thru your haunt and build scareboxes so actors can access more area to scare. Bring in new attractions for your guests to spend money on, stop relying on being the longest haunt, how about just the best and most fun experience!  Count on the most dedicated staff members, rather than filling in area's with people who don't really want to be there in the first place.  The original Darkness use to do close to 50,000 people and we ran with a staff of 35 to 40 actors so doing it with a dedicated PAID staff of 50 to 65 is defiantly double for me.  By shortening the haunt, which reduces dependency on a large staff, adding more side attractions, and using new reclaimed space for year around escape rooms for example is going to help your business STAY IN BUSINESS.  Yes its getting harder for haunts but if you get smart you'll weather the storm and PAY your staff!!!
MORE NEWS CLICK HERE
Tweet