Escape games!  A year ago everyone was talking about them, and if they weren’t opening them they were thinking about it.  Not us. Long, long ago we tried all sorts of wacky haunt related activities until we made a simple decision – focus on the core!  We did and it worked out for us very well and allowed the haunt to become successful. But EVERYONE was just diving into these escape games and it seemed to be the main thing haunters wanted to talk about. Did we want a new full time job? No thanks… the haunt kept us busy enough. Did we have room for it? Nope, we were using every inch and didn’t want to pull back on show space. But then I heard Kelly Collins speak about 3 minute escape games and it got me thinking…Only open when the haunt is… Only takes up a tiny footprint… Something new and fun to try…. So we figured why not and jumped in!
Right out of the gate Max (my son) and I were most concerned with throughput, and we wanted to build a game that was completely automated with zero reset time.  The space would be small - 8x8 feet with a small tech room on the side, just big enough to squeeze into a corner of the gift shop. Since we had a bunch of steel grating and were cranking out FR tech panels with our new vacuform machine, we wrote up an industrial concept and called it THE MANGLER’S FEAR MACHINE after one of our more well-known icon characters.  A five step clue stream was decided upon, with each discovery revealing the next.

The room is run by a cascading series of Fright Ideas Flexs controlling multiple videos shown on two different monitors using Bright Signs for playback. When the guests first enter the room, a video of the Mangler explains the game, and the countdown begins on a second monitor. There are several “scare” effects that players can trigger including a saw blade that drops into the set, strobes and crackers, etc. but they do not affect the actual clue stream. If the players do not trigger the first sequence effect soon, the Mangler appears every 30 seconds or so with an increasingly clear set of clues. When they move to the second puzzle he resets and moves to the first clue for the second puzzle, etc.  so clues are automatically given throughout the game. Since it is only 3 minutes long the operator watching the guests from a monitor will also give audio prompts if they get too far behind.

The game is basically “stick your hand in a disgusting place” to find the hidden button, and needless to say they really appreciate the hand sanitizer we supply as they leave the machine!  We beta tested the game at a summer event we did at the haunt and after a few tweaks to make the game easier including adding subtitles for the Mangler, and a few lighting changes to make the clues more obvious we were ready for the season.
The game would have run about $5000 with parts and labor to make from scratch, but we had a lot of the materials available so it didn’t really cost that much out of pocket.  A day for the walls, a few days for vacuform production and finishing, a few days for steel and wood fabrication for the puzzles and scares, a day or so for paint and set dressing and props went pretty fast. The most time was spent on tech, audio/video and also in wiring up all of the effects, pneumatics and controllers in a way to make it very resettable and still very safe – it was a big concern to us that boxes would not shut on people’s hands for example, if there was a power drop.

Ultimately it was a success. Around 5000 people paid an extra 5 bucks to play with about 3000 winning the game. With only one staff person to run it and very happy customers we were glad we did it. Not exactly haunt numbers but still lots of fun and not a bad profit center as well. Now full sized escape games… THAT will be a story for another day! 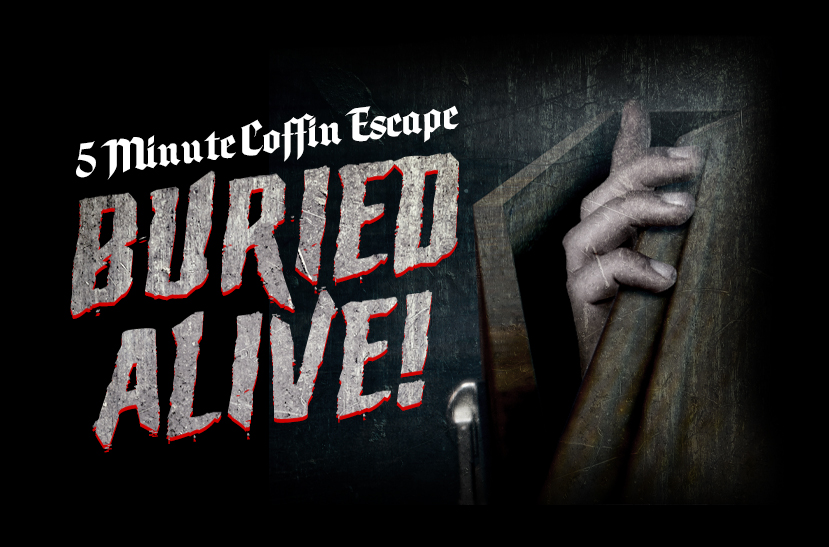