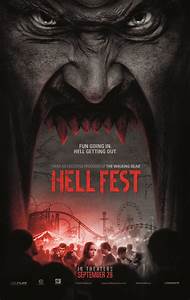 Hell Fest is a horror movie set inside a haunted scream park where a rogue actor runs around killing patrons for real! Let me just start off by saying this movie wasn't scary, or original, and lacked good actors, director and witter.  This movie could be one of if not the worst modern day horror movie ever made.  What makes a good horror movie?  Well you need something original this movie doesn't have it!  How about good actors who can make you believe what is happening is real.  This movie lacked anything creative, good actors just top to bottom bad.  Personally I'd rather sit in a tub of acid than watch this movie again.  Okay you get it I hated this movie.

Coming from a haunted house industry persons perspective this movie couldn't have been worse.  This movie tried to make a movie about a killer in a haunted house, and in doing so created the worst looking haunted houses, and created very false perceptions about the haunted house industry.  For example a clown actor runs over to a group picks up a girl and runs off with one of the girls... that would NEVER happen in a haunted house. Also wouldn't that be illegal maybe just maybe?  Another total false stereotype this film made about haunted houses is that haunts use REAL weapons.  During several scenes the killer was able to find for example a REAL ax stuffed in a fake dead body.  This would NEVER happen in a haunted house no haunt would use a real knife or ax to scare people or use as decor whereby the customers could simply grab it.  On several occasions the actors stop the guests, pin them down, strap them to a table and worse none of these things would ever happen in a haunted house.  The actors of this movie went into several haunted houses and in each case they're put inside alone left to wander around alone again simply would never happen.  Another scene had an actor jump on a young girl and straddle her all the way thru a fake dark ride.  The movie is filled with common industry rules that haunted house owners and operators would NEVER DO because its unsafe for both the actors and the customers.

Lastly the notion that one of our actors would roam around the haunt, and start killing people as a sport, again would not happen.  Why?  Because for one groups always stay together so if you attacked a customer the rest would know.  Furthermore haunted houses have great security and actors are trained to be additional eyes and ears of the attraction.  If something looked out of place it would be reported right away.  Could something like this actually happen sure it could, and for Hollywood to plant such an idea in my view makes this libel for anything that could happen into the future.

Not to get on a soap box but why does Hollywood preach liberal points of view, especially on gun control or violence against woman, when the movies they make create promote guns, death, destruction, violence especially against woman, sexism and worse?  Should they really be preaching to the rest of us?

In closing, Hell Fest is a disaster of a movie, which creates a lot of falsehoods about attending a haunted house near you!  We can assure you that haunted houses are safe, a lot scarier than anything in this disaster, and most importantly safer!  Do yourself a favor and watch the new Halloween instead a very creative re-telling of a classic!  Thanks for reading.
Tweet

Transworld Haunted House and Escape Tour - Learn all the Details

Read Blog
Is McKamey Manor a Haunted House? Read On!

Read Blog
Make Your Own Halloween Costumes Learn How

Learn how to make your own Halloween costume by visiting your local Goodwill Store.  Watch the videos below.  Then Scream at the best haunted houses in America.    FEMALE COSTU

Haunted House Review and Rating of Chamber of Horrors NY– Hauppauge, New York By Nick Georgandis and Frank Ingargiola   When you're trying to find the biggest, scaries

Once again the very dumb people over at the Halloween and Costume Association think they own Halloween.  They need a reality check because not only do they not own Halloween, their failing associ

Read Article
Best of Everything Halloween Horror and Haunted Houses 2016

Hauntworld rates the best Horror Attractions in 2016 from the best movies, haunted houses, Halloween, to even Escape Rooms. Which attractions should you be visiting Halloween 2016?  We have the list right here from Hauntworld.com