How to Carve and Create a Pumpkin Creature - Home Haunting 101

At Haunted Overload we strive to give the patron a unique and original Halloween experience. To do so, we must constantly build new set pieces that surround the crowd with exciting and visually pleasing images of Halloween. In this article I will focus on how to construct oversized static pumpkin headed creatures. These figures are meant to be set up outdoors. They could be used at an outdoor event or even outside an indoor haunt to attract attention.  Last season we made 4 figures at once to be used throughout our expanded queue line section. People enjoy looking at them as they wait in line for the show. They also set the tone and provide the atmosphere that people have come to expect at our attraction. 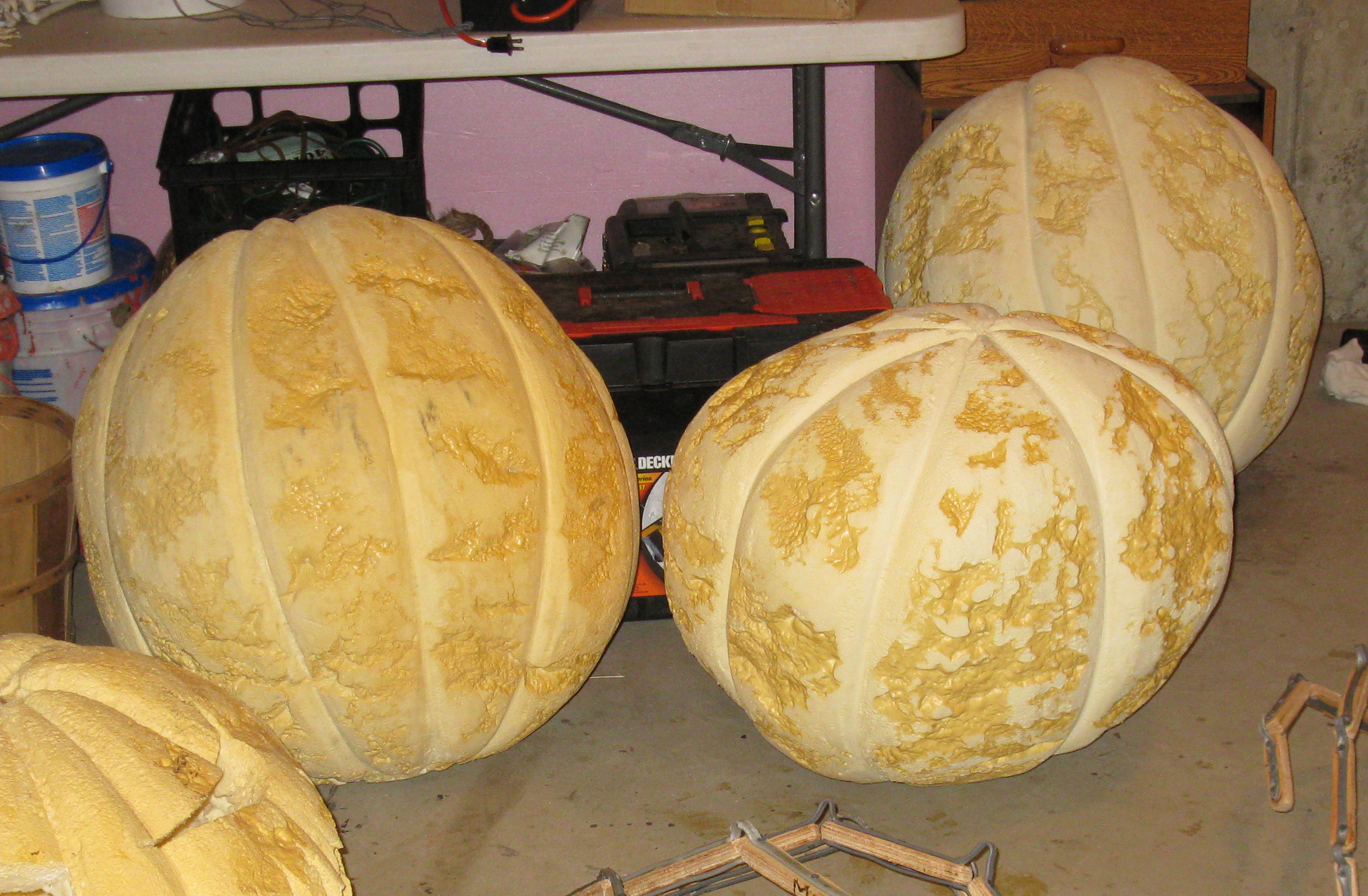 When designing and constructing creatures like these, cost is always of the utmost concern. Strength is also a very important consideration because they will be battered by wind, rain and possibly snow. One of the figures was built on a hill and loomed over the crowd. We could not afford to have the thing toppling over on people so the design needed to bullet proof, using braces that blended into the scene and looked like small trees.

The heads and hands of the figures needed to have the most detail and look real. The goal was to make the heads and hands blend in with the organic material we covered the bodies with at the end. I was excited to try an all new technique for making the pumpkin heads last year. We secured the sponsorship of a spray foam insulation company. That was a huge help for the project because it kept costs to a minimum. The owner educated me about the two different kinds of foam that he used. I knew I would be able to use both in the production of the new heads.
The first step was to have the foam contractor spray 4 large piles of open cell urethane foam. This kind of foam is extremely soft, like a sponge and very easy to carve. You can almost carve it with your bare hands. I used a wood rasp to quickly round the shapes into spheres. Then I asked the contractor to coat the balls with closed cell urethane foam about 1.5 inches thick. This is a much harder foam with more strength. Once again I used a wood rasp and electric sander to shape the foam to appear like a pumpkin with ridges. Then the face could be carved just like a real jack o lantern. The soft foam was then pulled out by hand leaving a hollow shell. A hole was cut in the bottom to make a neck out of chicken wire and Great Stuff spray foam. The neck was used to mount the pumpkin to the body. At this point the shell could be hard coated. I prefer to run to the hardware store and get a bucket of Liquid Nails or any other brand of construction adhesive. Smearing it on with rubber gloves strengthens the pumpkin just fine and makes for a realistic looking skin by filling in some of the gaps and holes that may be left in the foam. 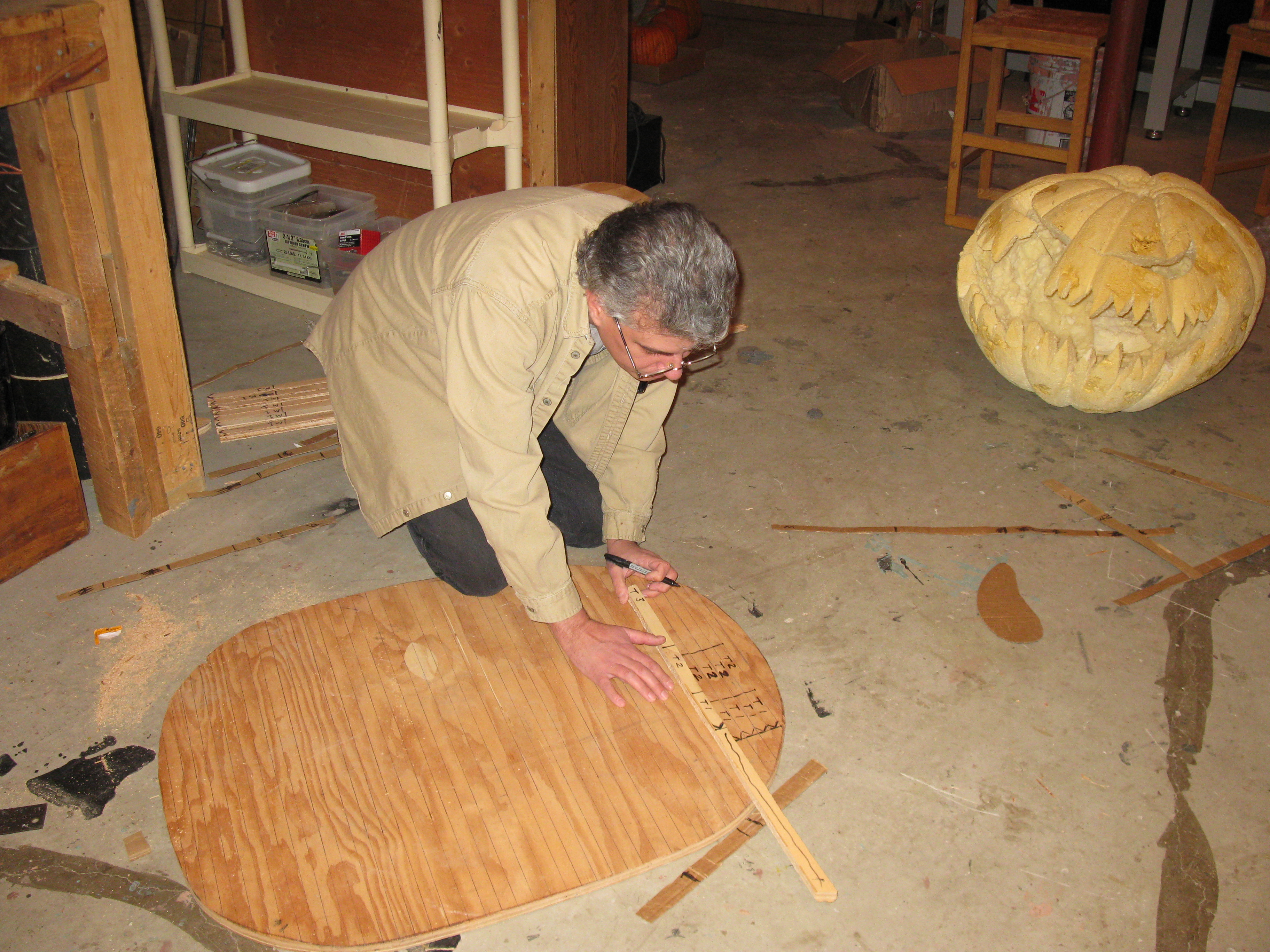 The stems were cut from pink foam, ridges made with a Dremel and hit with a heat gun. The heat gun made the ridges stand out more and hardened the foam nicely. We dunked the stems in black latex paint and let dry. Highlighting them with lighter colored paint brought out the details. I like to paint the entire pumpkin with thick black latex paint before a finish coat of pumpkin orange spray paint. The inside got a lighter yellow / orange color to make them look real. The nice thing about this technique is that all the imperfections in the pumpkin add to the detail and make it look more realistic than a perfectly shaped pumpkin made out of plastic.

The construction of the hands came next. The size of the pumpkin heads determined how big the hands would be. The hands were made to be roughly the same size as the heads. Once the proportions were determined, strips of plywood were cut for each bone of the fingers. They were then sandwiched between 2 strips of Romex electrical wire and screwed together. The wire held everything in place and allowed the fingers to bend at the knuckles. Two sections of electrical conduit were flattened with a hammer.  Holes were drilled to make way for screws into each side of the plywood palm. A section of 2x4 was then bolted between the conduit for an extremely strong connection at the wrist. These hands are rather heavy when finished so this joint needed to be very strong to last in the elements. I wanted to make sharp fingernails for the hands. These were made by sculpting the nail shape over small sections of the Romex wire. Magic Sculpt 2 part epoxy clay was used. The nails could then be screwed to the ends of the plywood fingers. 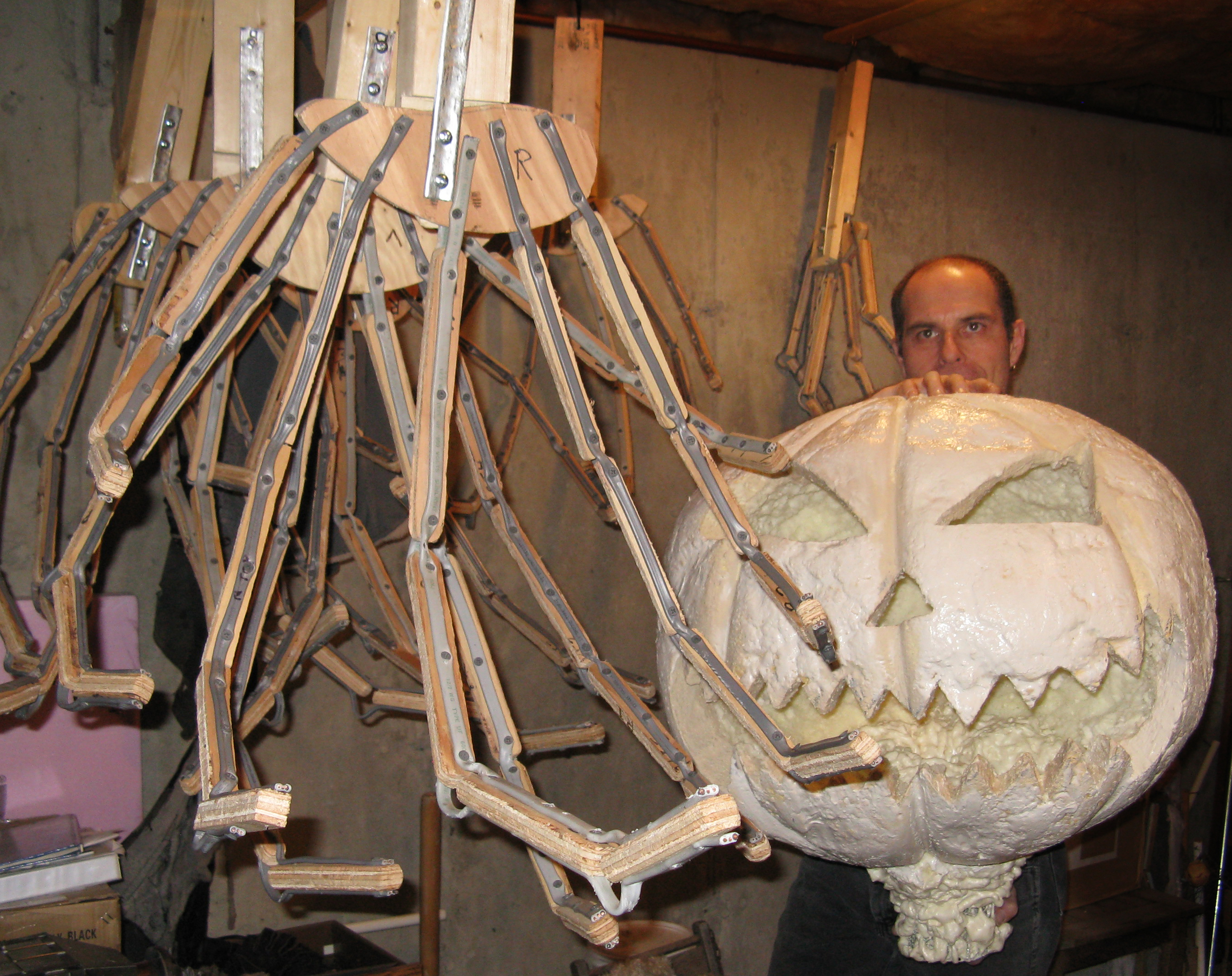 The hands at this point looked pretty boring. They needed a good amount of detail to look real and organic. For this we used Monster Mud and strips of cheese cloth. Directions for Monster Mud can be found all over the internet. The cheese cloth is light enough to sculpt veins and crazy looking texture over the plywood hands. The hands can be positioned before the mud is applied. If the joints are covered with it they will harden in that position. Once dry, Liquid Nails was smeared over the hands for more protection and detail. Finally black spray paint was applied. I intended to highlight the hands with lighter colored paint but totally ran out of time. The hands were black for this year but will get more detail using a dry brush technique for the upcoming season.

With the heads and hands done, it was time to build the bodies. Great care and planning took place to position each of the 4 figures for the best effect before actual construction. I had a local saw mill cut me four beams 4x4x14 feet long. These would be the backbone and main support for each monster. Post holes were excavated deep enough for the beams to stand solid and strong when tamped down. Each one leaned slightly forward for a more natural stance. The proportions were calculated by laying sections of 2x4’s on the ground in the shape of a large body. Using high quality outdoor decking screws, the bodies were screwed together to look like stick figures. Various positions helped make each one look unique and as dynamic as possible. Once the positions were decided upon, smaller sections of wood were added to brace every single joint and possible weak area. The legs were staked into the ground providing three points of contact with the ground. The figures with outstretched arms needed to have saplings staked in the ground and attached high on the arms for additional support. The hands were screwed into position on each of the figures. The heads were attached by sliding them down over stakes secured to the top of the main 4x4. Once the desired position was achieved, Great Stuff foam sprayed into the neck hole held the pumpkin heads in place. 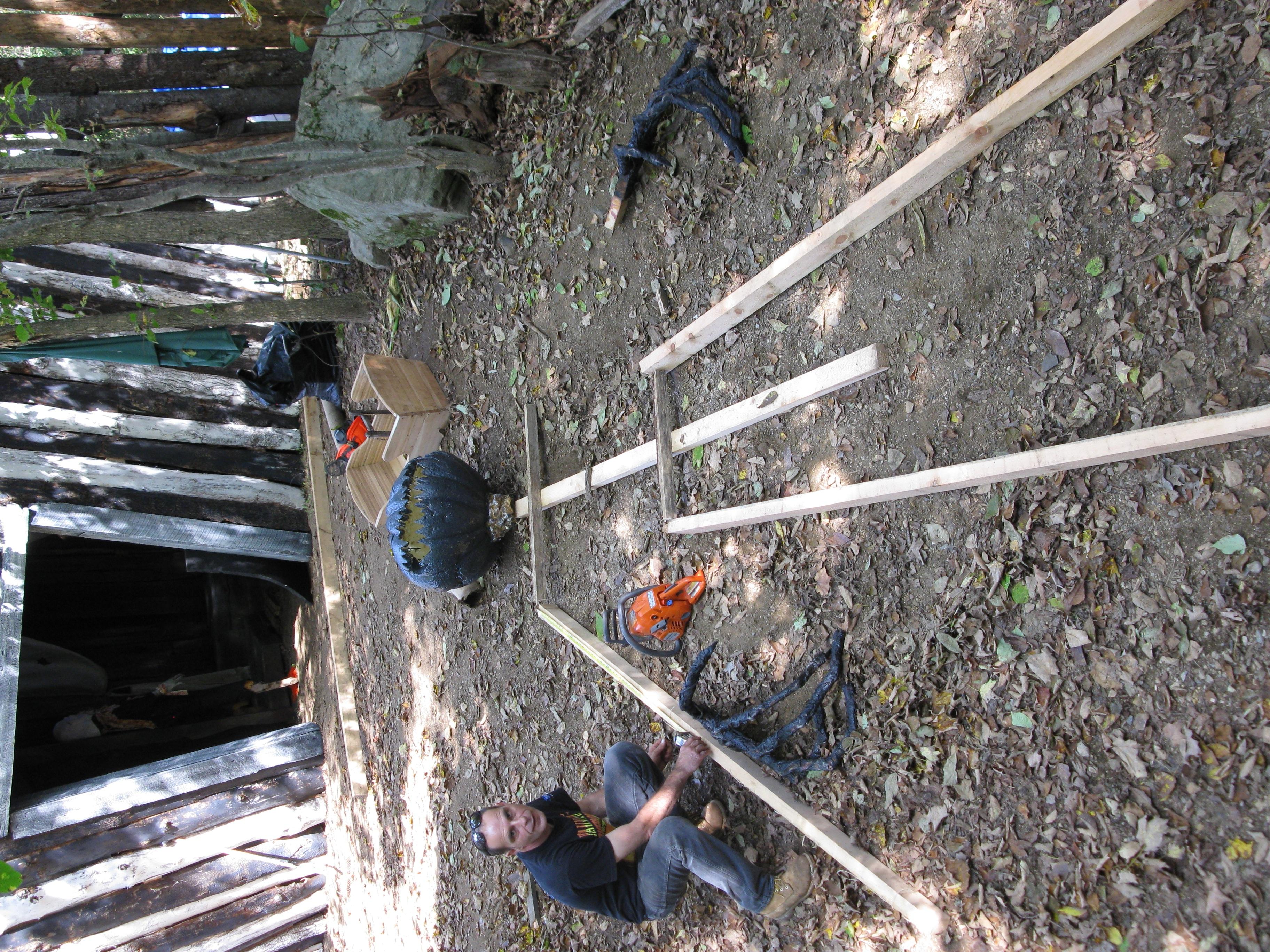 Chicken wire was stapled to the wood to form the rib cage and flesh out each statue. Black construction fabric was used to cover the entire body of each one. Finally, burlap, erosion cloth, pumpkin vines, and hay were used to detail the bodies. Lighting of the finished figures was also important to their overall effectiveness.  By up lighting them, details of the burlap and pumpkin vines were accentuated for a more dramatic look. Battery operated flickering tea lights were used to illuminate the heads before each show. Lights that plug in are planned next year for convenience. The heads can be switched around from figure to figure for different looks as well. The Statues really gave our new queue line the eye candy it needed. Patrons were very enthusiastic about the oversized creatures and made many positive comments when viewing them. 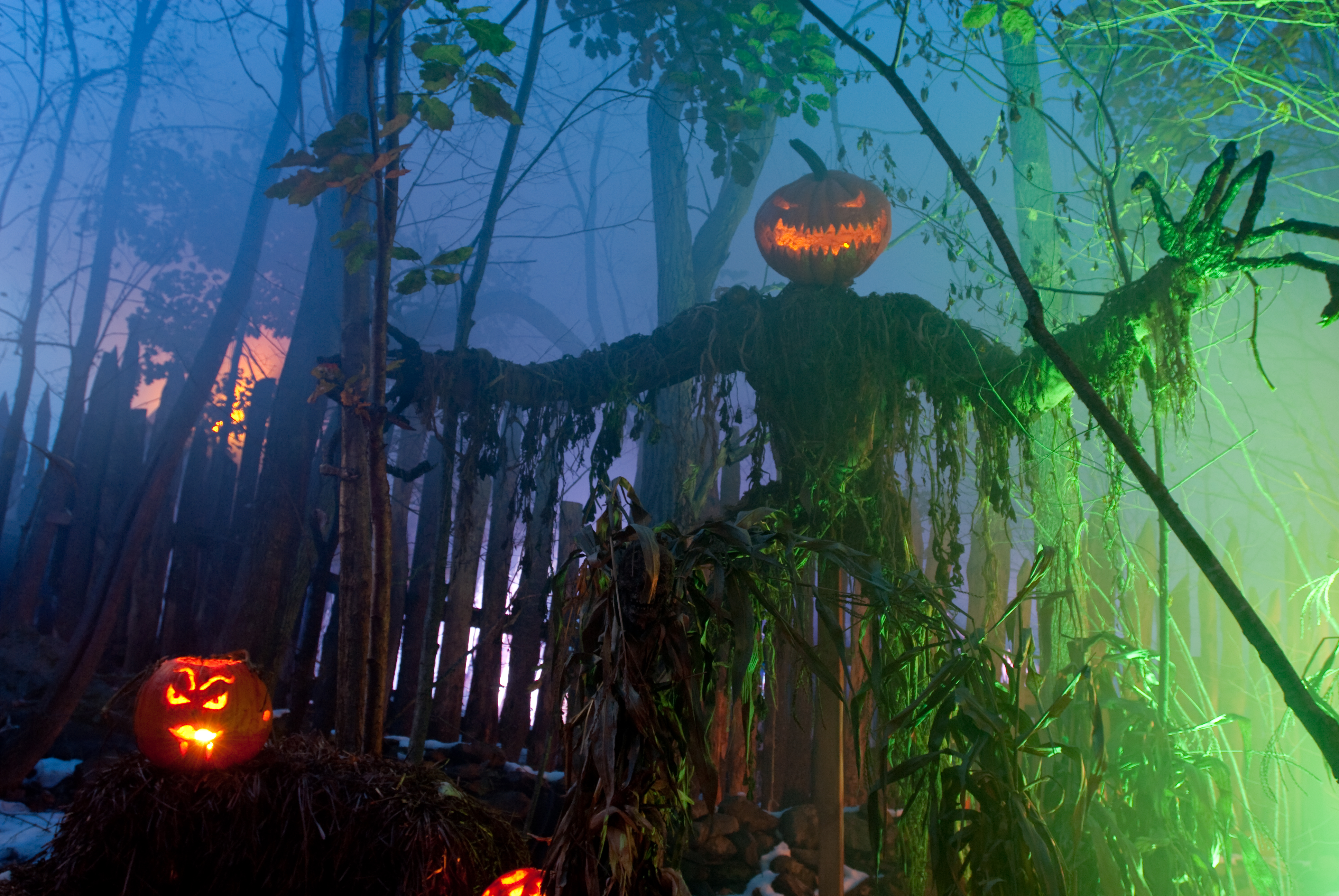