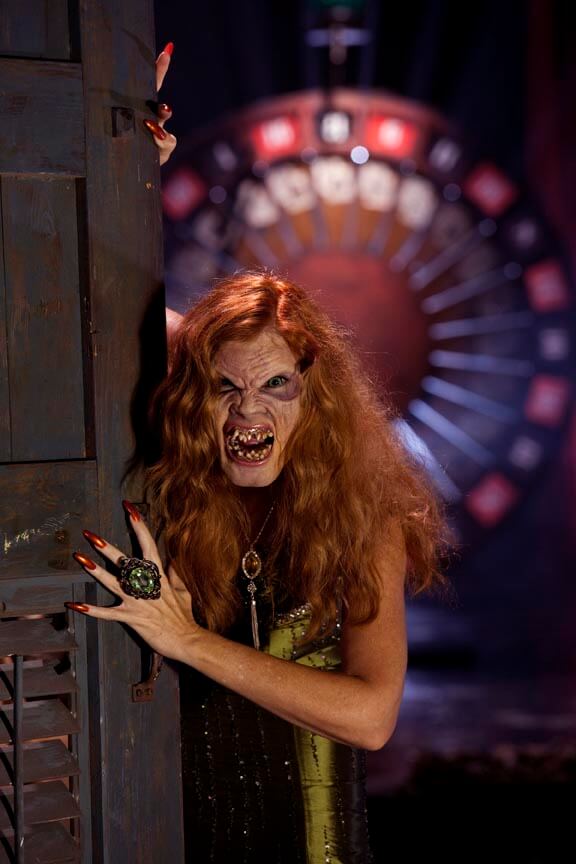 YOUR FATE IS IN HER HANDS

ORLANDO, Fla. (August 31, 2011) – You seek her… hoping she’ll be on your side. She appears…an enchanting seductress…and you decide to take a chance.

But the more chances you take, the more she craves…you. Her eyes grow cold. Her face contorts into...something that is not human. Her charming laugh turns to rabid growl. Your luck has run out. You have made your last choice.

For 25 nights beginning September 23, Universal Orlando’s Halloween Horror Nights returns as the nation’s best and most intense Halloween event. Guests will confront extreme Halloween entertainment that cannot be experienced anywhere else. This year, they will scream as they become prey to fiendish creatures, panic as they come face-to-face with a horrifying “thing,” feel chills as they are haunted by deceased souls – and watch in paralyzing fear as Lady Luck transforms from a tempting seductress to a bloodthirsty beast.

Lady Luck is the force behind this year’s event, and she awaits those brave enough to challenge her and take a chance. Her main weapon is choice, and her desire is for you to make yours. But no matter what you decide, you can’t escape the terror she has in store at Halloween Horror Nights 21.

For a detailed listing of each haunted house, scarezone and show featured at this year’s event, see below.

Halloween Horror Nights runs September 23-24, September 29-30, October 1-2, 6-9, 13-16, 19-23 and 26-31. Tickets and vacation packages are on sale now and can be purchased at www.halloweenhorrornights.com/orlando. Due to the event’s popularity, tickets for weekend nights are expected to sell out and should be purchased well in advance.

Guests can get updates and exclusive details on Universal Orlando’s Halloween Horror Nights on the event’s official Facebook page (www.facebook.com/halloweenhorrornightsorlando)

AN OVERVIEW OF HALLOWEEN HORROR NIGHTS 21

Nevermore: The Madness of Poe

The madness of Edgar Allen Poe’s greatest works has come to life. Step into the mind of the iconic writer, where every turn of the page takes you closer to the brink of insanity.

Four ships began Columbus’s fateful voyage, only three became legend. Condemned to a watery grave, the mutinous and cursed crew of that fourth ship has returned with a vengeance. For within the walls of a Spanish fort, a maelstrom has brought from the depths....death itself.

Join creature feature host, H.R. Bloodengutz, in his final televised broadcast as he presents a SCARE-athon of holiday-based horror that is guaranteed to cleave you screaming for more.

Paranoia spreads like an epidemic among a group of researchers in an isolated Antarctic outpost as they are infected, one by one, by a horrifying creature from another planet. In a place where there is nothing, they found something.

Saws N’ Steam: Into the Machine

Spinning blades and massive, crushing pistons await you around every corner as you are forced deeper into the bowels of a mechanical nightmare. Give yourself to “The Machine.”

An ominous portal reveals a 3rd dimension where all is not what it seems: a realm where our world and another collide. Surrounded by fiendish creatures, your eyes will deceive you with every step through this phantasm of terror.

As snow falls on this normally serene gothic cemetery, the deceased souls that occupy its confines have their sights set upon you, insuring that the chill you feel up your spine is more than just the cold of night.

Within every war, the Nightingales have appeared. Able to transform themselves to fit any setting, these savage banshees feed on the weak and the helpless. Patrolling WWI era trenches, you discover that you are more than just at war…you’re being hunted.

For decades now the city has been degrading from the effects of Acid Rain that still falls today, caused by factories which sprung up on the city’s edges during the 20th century. Those that have lived and survived the blistering decay are all alone in the city. Survivors have stripped the city of all life to sustain their own…dare to enter the ACID ASSAULT.

Upon entering into the Canyon of Dark Souls, you will feel like a small spec of humanity as the overwhelming sense of death surrounds you. Creatures that dwell within the Canyon are not welcoming so walk slowly as to not disturb them.

Enter, if you dare, into our garden where Evil grows. Nature has taken this once well manicured sanctuary back from the humans who once kept it. Now the creatures that inhabit the garden are making any human that enters their prey.

Journey through the ever changing maze of darkness. This all black maze will morph and change as you walk through it. You will not be scared the same way twice.

As daylight shines upon our Temptresses, their appearance, though evil, allows you the spectacle of beauty. As night falls, these 7 temptresses will show their true colors and take on their true Fatal Evil forms. Beware of your own temptations.

Your Luck Has Run Out

Enter if you dare into the lair of the LUCKY! Your choices will determine if you make it out alive. Witness lucks deadly wrath, will she choose you to be her next victim?

Party on as those two most excellent dudes return to skewer the biggest names in entertainment and pop culture.

how to advertise a haunted house

Haunted Houses are finding it challenging  dealing with social distancing.  We've written several times already that it's totally IMPOSSIBLE to social distance at a haunted house.&nb

Universal Studios made the announcement today they're cancelling both Florida and Los Angles Horror Nights.  This is a big blow to Universal Studios bottom line as these events generate hundr

Read Blog
Netherworld Gets a Change of Address - Atlanta Georgia

Read Blog
California Announces Another Shut Down - Is it time to throw in the towel?

California announced today another complete business shutdown including family fun centers therefore this would include haunted houses.  With today's announcement and uncertainty if I owned

A SCREAM PARK DOES NOT HAVE TO BE ANOTHER HAUNTED HOUSE   Over the years I have met many haunt owners at trade shows, conventions and visits to our farm.  A common question consistently co

Blood Recipe for Haunted House Props    You have many options for fake blood on your props. The right formula depends on your needs- just looking good is not enough if it is not durable or